The Rainbow Bridge by Stephen Mayles

A beautiful rainbow over the cattery here at Chestnut Lodge made me think of the Rainbow Bridge poem about pets who die and wait for their owners. 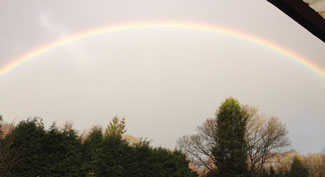 The idea of the Rainbow Bridge has been used in pet bereavement circles for some time now and is particularly popular among groups in the States. Many people find it a great help in coping with the loss of a pet. For anyone who has not seen it here is the story.

Just this side of heaven is a place called Rainbow Bridge.

When an animal dies that has been especially close to someone here, that pet goes to Rainbow Bridge. There are meadows and hills for all of our special friends so they can run and play together. There is plenty of food, water and sunshine, and our friends are warm and comfortable.

All the animals who had been ill and old are restored to health and vigor. Those who were hurt or maimed are made whole and strong again, just as we remember them in our dreams of days and times gone by. The animals are happy and content, except for one small thing; they each miss someone very special to them, who had to be left behind.

They all run and play together, but the day comes when one suddenly stops and looks into the distance. His bright eyes are intent. His eager body quivers. Suddenly he begins to run from the group, flying over the green grass, his legs carrying him faster and faster.

You have been spotted, and when you and your special friend finally meet, you cling together in joyous reunion, never to be parted again. The happy kisses rain upon your face; your hands again caress the beloved head, and you look once more into the trusting eyes of your pet, so long gone from your life but never absent from your heart.

Then you cross Rainbow Bridge together….

You will find a number of re-writings in the form of poems on the web.

The Legends Giving Rise to The Rainbow Bridge 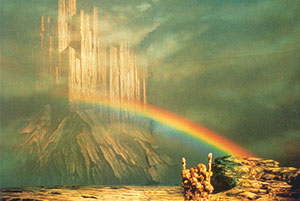 In Norse mythology, Bifrös, or sometimes Bilröst, is a burning rainbow bridge that reaches between Midgard (the world) and Asgard, the realm of the gods.The bridge ends at the residence of the god Heimdallr, who guards it. It is thought that the bridge may have originally represented the Milky Way The following website gives other details of the legend and a new take on the poem.    http://www.novareinna.com/bridge/norse.html

The same website gives details of another legend coming from the Native Americans.

When a human dies, there is a Bridge he or she must cross in order to enter Heaven. At the head of this Bridge waits every animal that the individual encountered during his or her lifetime. Based upon what they know of this person, the animals will decide which humans may cross the Bridge and which will be turned away.

An interesting view – the power of humans over animals is turned right around after death.

The Rainbow Bridge in the Material World

In the solid world I have come across two Rainbow Bridges

The Rainbow Bridge in Tokyo 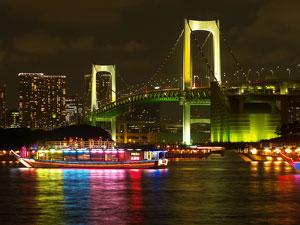 The Rainbow Bridge in Tokyo Bay

First is Tokyo’s Rainbow Bridge, a suspension bridge spanning Tokyo Bay to connect Shibaura Wharf and the Odaiba waterfront area. The bridge was completed in 1993 and was painted all in white to help it better blend in with the Tokyo skyline. During the day, solar panels on the bridge collect and store energy to power a series of colorful lights that turn on after sundown and give the bridge its name.

The picture is by Marc-André Mireault

The Rainbow Bridge in Utah

The second is the Rainbow Bridge National Monument in Utah, USA.

Tucked among the rugged, isolated canyons at the base of Navajo Mountain, Rainbow Bridge was known for centuries by the Native Americans who lived in the area. Native Americans living in the region have long held the bridge sacred. Ancestral Puebloan residents were followed much later by Paiute and Navajo groups. Several Paiute and Navajo families, in fact, still reside nearby. Indeed, Theodore Roosevelt wrote after a visit in 1913 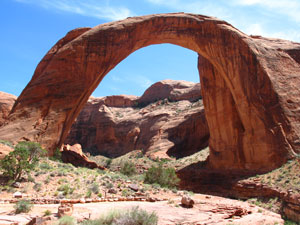 “Next morning early we started our toilsome return trip. The pony trail led under the arch. Along this the Ute drove our pack-mules, and as I followed him I noticed that the Navajo rode around outside. His creed bade him never pass under an arch.”

From its base to the top of the arch, it is 290 feet-nearly the height of the Statue of Liberty  -and spans 275 feet across the river. The top of the arch is 42 feet thick and 33 feet wide.

So there it is – all this from a fleeting rainbow over a Sussex Pet Cemetery. The world is indeed connected.